In this article, we’ll discuss React Navigation for React Native, which is used to easily provide navigation functionalities to your mobile application. After a small introduction and overview of some common navigation types, we’ll be setting up a sample project with different examples of navigation, provided through GitHub gists.

Before we begin with React Navigation

Keep in mind that this article will serve as a general overview and introduction to React Navigation. For more information or advanced subjects, please review the official documentation here.

What is React Navigation?

React Navigation is an open-source, extensible and easy-to-use library used to implement navigation functionalities in a mobile application under React Native (or Expo!). It’s based on JavaScript, so it’s fully customizable and comes out of the box with basic components for common navigation requirements on both iOS and Android, such as tabbed, stack or drawer navigation components, all with a great look and feel.

Now that we have an overview of what React Navigation is, let’s expand a bit on why you should use it.

Why use React Navigation?

Note: As the official docs mention, “If you’d like to achieve a native look and feel on both Android and iOS, or you’re integrating React Native into an app that already manages navigation natively, the following library provides native navigation on both platforms: https://github.com/wix/react-native-navigation.” This alternative library will not be covered in this guide.

Here’s a quick introduction to the most common navigation types:

When a user taps on a link on the screen, a new screen is stacked on top of the current one. In the eyes of the user, the screen is “replaced”, and the user will only see the new one. By default, this screen contains a navigation bar on top, as well as the content area. Both can be customized.

The user can navigate through different screens using controls at the top or bottom of the screen. The tabs remain visible at all times. In the example below, the tabs can be seen at the bottom. 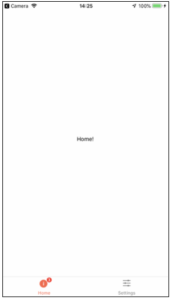 A slide-out side drawer is used to navigate to different screens. The example below shows an open navigation drawer (which is triggered by swiping from left to right). 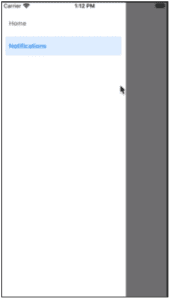 How to use it

To show how to use React Navigation, we’ll create a small proof of concept (POC), which illustrates an implementation of stack navigation, tabbed navigation and drawer navigation. The POC will simply show a welcome screen containing a button with the text “Say Hi!”, which, when pressed, will redirect the user to another screen and show a greeting message.

Before installing React Navigation, you’ll need a React Native project created and ready to go. To do this as simply as possible and for the purpose of this proof of concept, we’ll use the Create React Native App utility by following the instructions in this GitHub link.

At the end of the installation process, you should have an entry file (usually app.js or index.js) with an enclosing NavigationContainer tag as seen here:

First, let’s expand on the most basic example: stack navigation. To create a stack nav, simply use the auxiliary function imported from the react-navigation/stack package to create the navigator and set the corresponding screens inside, as seen below:

The screens themselves have a component prop, which must be set to React components. These components will receive a navigation prop, which exposes several utilities, such as those used to navigate to other screens. You can also pass other settings using the options prop, which can be used to set a title, as seen in the previous example.

Below, you can see example React components for the screens, as well as navigating between them (as seen on the OnPress of the “Say Hi!” button in the WelcomeScreen) and passing parameters (as seen in the message output in the GreetingScreen). These can be imported into the App.js file for usage, or directly pasted inside it.

Note: You can also go back to the previous screen by using navigation.goBack().

Note 2: Don’t forget to import or paste the React screen components (Welcome and Greeting) in App.js if using this example, otherwise the app won’t work. Note that this isn’t shown in the gist.

Following the same example, this is how a minor code sample of drawer navigation would look like:

You can find more info on drawers here.

Following the same example, this is how a minor code sample of tabbed navigation (at the bottom of the screen) would look like:

You can find more info on tabs here.

This article should have served as an introduction to React Navigation and a quick overview of different types of simple navigations and their implementation. You should aim to use the one that is most appropriate to your project/design, while facilitating the user’s experience throughout the app.

Keep in mind the note on why (and when) to use React Navigation (vs. alternatives like react-native-navigation) and always be sure to check out the official documentation to expand on the subject as well as review how to implement advanced features if required.